In December 2011, the Israeli news media station Channel 2 reported an astonishing discovery from Afghanistan. A  trove of medieval Jewish documents and items had been found in Afghanistan's northeastern province, the Samangan province, months or even years earlier, its contents already sold to antiquities dealers overseas.

Below, photo of text fragment from Afghanistan [Courtesy of the National Library of Israel]
11th Century Letter Dealing With Financial and Family Matters, in Judeo-Persian: 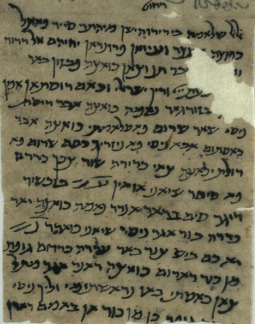 ​About 500 fragments are estimated to be still circulating among antiquities dealers and buyers around the globe.

The very site of the discovery is hugely important because this archive was located near the famed Silk Road, whose routes extended across the Middle East and Central Asia to China.

The trove contained manuscripts written in Persian, Judeo-Persian, Arabic and Judeo-Arabic, potentially reflecting its writers’ different countries of origin as they made their way eastwards along the famous merchant route.

The archive materials included personal letters, financial and legal records, biblical texts, excerpts by medieval Jewish exegete Saadiah Gaon, and even jewelry, such as rings with distinctly Hebrew names on them (like “Shmuel bar Yosef”). The Afghanistan archive looks to be at least 1,000 years old, dating to the 11th century, and promises to provide vital breakthroughs for studying the medieval Jewish world.
A major step forward occurred in January 2013, when Israel's National Library reported that it had recently purchased 29 of the documents after significant negotiations with antiquities dealers. The National Library says it plans to continue to work on recovering the Afghan Jewish fragments, and digitize the documents for all to see.

"To this day," wrote Israel's National Library, "we have not seen Jewish findings of such magnitude and importance from this area." And "everything indicates that the findings are authentic," the National Library continues, as the fragments were examined by noted scholars and tested by carbon dating. For more pictures of the recovered fragments, please go to the National Library's site here.

Another breakthrough came when the National Library of Israel acquired another 250 of these documents; the acquisition was made public in September 2016. Researchers now believe that this precious trove was actually not a geniza (hidden repository of documents) similar to the famous Cairo Geniza, as originally suspected, but "the archive of a Jewish family of traders who lived on the Silk Road in northern Afghanistan in the 11th century," writes Israel's newspaper Haaretz. "The head of the family is named in the manuscripts as Abu Nassar Ben Daniel," explains Haaretz, "and the family apparently lived in the central Afghani city of Bamyan," likely best known for its two huge statues of Buddha that the Taliban destroyed.

Nothing remotely similar has ever been found in Afghanistan before. The importance of this surprising archive discovery, with its centuries-old documentary fragments and artifacts of Jewish life, is tremendous.